“The sort of ensemble a girl might wear to dance in the courtyard of the Moulin de la Galette on a beautiful summer Sunday afternoon, not an outfit you would put on to walk a dozen blocks so you could take it off for a painter.” 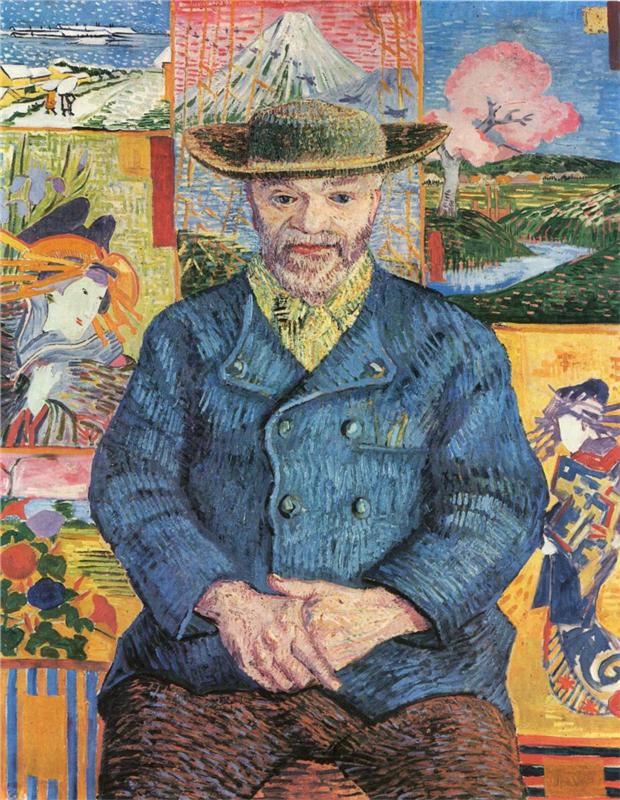 “But I was going to go buy paint from Père Tanguy this afternoon.”

This is Vincent’s painting for Pére Tanguy, from around 1887. He was the “color man” for most of the Montmartre painters, as his shop was in place Pigalle, at the foot of Montmartre. Note all of the Japanese prints in the background- huge influence on Vincent, Lautrec, and even Monet, who collected them. 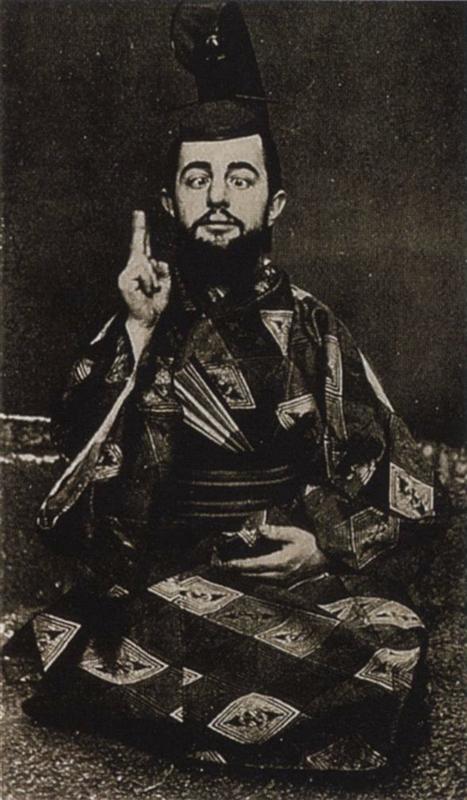 “She emerged from behind the screen wearing a white Japanese silk kimono that Henri kept around the studio for his models, or for himself, as on occasion he liked to dress like a geisha girl and have their friend Maurice Guibert take photos of him.” 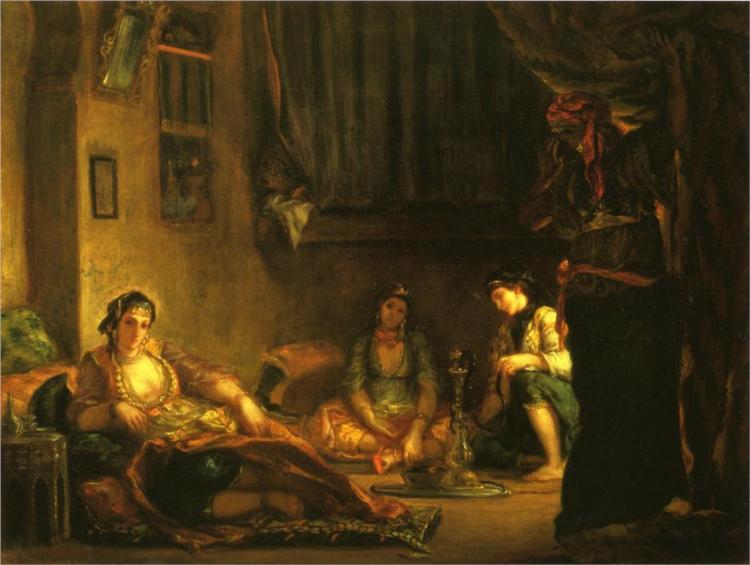 “He’d decided to set her in an Oriental harem, after the Algerian paintings of Delacroix. Great flowing silks and golden statues in the background. Maybe a slave fanning her.” (Women of Algiers in their Apartment 1849).

Delacroix was the French painter that opened the door, more or less, to the brushwork of French Impressionism. A darling of the Salon, his loose and interpretive style constantly put the academicians in the uncomfortable position of having to accept a style that they were denouncing publicly. Turner had done about the same thing to the British Academy. More about him, later.

“Could you do the underpainting in another color, say that pretty blue the man sold me?”

These paintings were done by Jennifer “Dingbat” Williams (her choice of nick-name, not mine) who works in a bookstore in Bakersfield, California, and got an early copy of Sacré Bleu, which said inspired her to do an underpainting of ultramarine blue. I think these paintings show the concept of “underpainting’ as well as any I’ve seen, and more or less show how the underpainting is eventually covered, but shows through, giving a “mood” to the painting. The Blue Nude that Lucien is painting would have a similar effect While Juliette wouldn’t actually be blue in the painting, the blue would show through, around the edges.

These pictures are “in progress”. When she finished the painting, I’ll post the finished picture.

After he’d been at it an hour, Juliette said, “My arm is going to sleep. Can I move it?” Without waiting for his permission, she started to swing her arm around in a windmill motion.

“Sure, I’ll call the painting Aphrodite Waving Like a Lunatic.”

So, I looked around for a painting that showed Aphrodite Waving Like a Lunatic, but there were no paintings called that. So I started looking at Venus paintings (Venus being the Roman version of Aphrodite.) Here’s what I found. 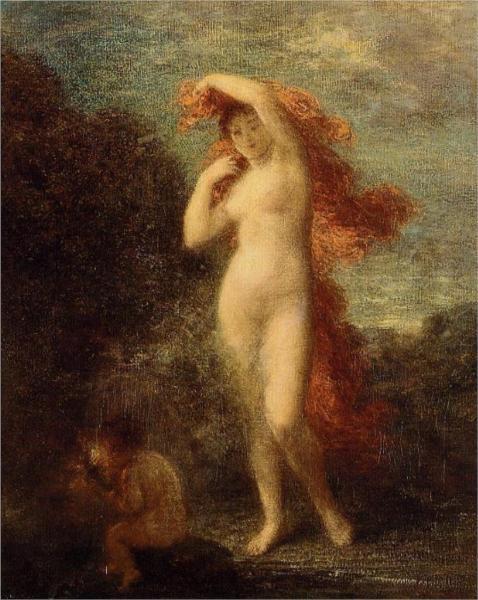 This painting is by Henri Fantin-Letour, who is more famous for painting pictures of other artists than he is for his other paintings. You’ll see his picture of Whistler and Manet in the book, but he also painted this: 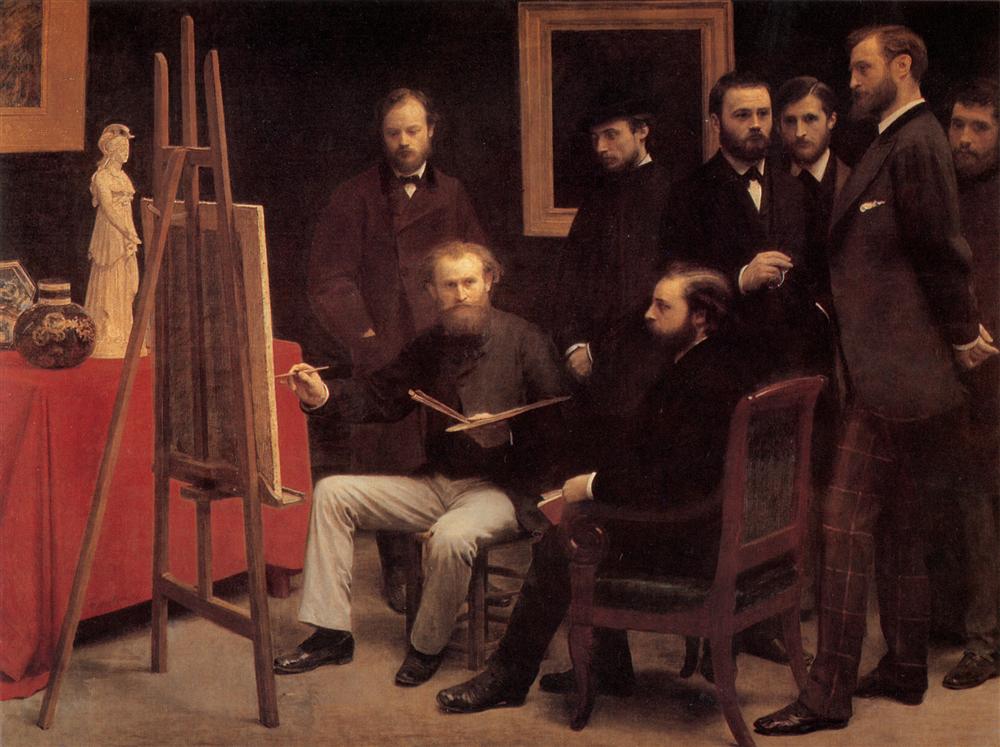 A Studio in the Batignolles – Homage to Manet – 1870, Here Fantin-Letour shows Edouard Manet at his easel, the shy young man in the hat behind him is Renior, the very tall fellow at the right is Frederick Bazille, who would be killed in the Franco-Prussian war soon after this was painted. Bazille is facing the novelist, Emile Zola. Claude Monet is the guy sneaking around over to the extreme right of the painting.

Anyway, so I was looking around for a painting of Aphrodite Waving Like Lunatic, and I found this: 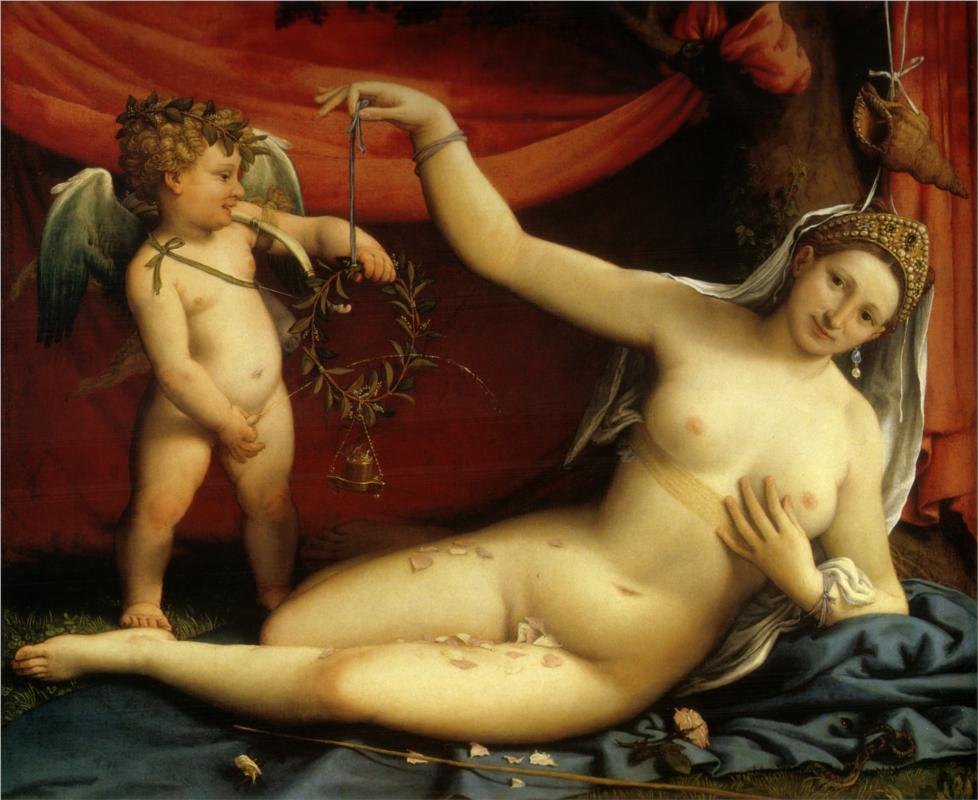 OMG WTF what kind of deeply freakish shit were the Renaissance painters into? Yes, this is Venus, and yes, that is Cupid, and yes, she is holding up a hoop of leaves, through which he is peeing. You know this was commissioned by some freak nobleman, because the only people paying for art in 1525 when Lorenzo Lotto painted this, was the Church and noblemen, and I don’t see the Pope going, “Yeah, you know what this church needs…” But you have to love that Lotto was careful to carefully arrange rose petals or wood shavings on her leg, so you wouldn’t catch a glimpse of her well-waxed lady parts, but it’s completely okay that a kid is peeing on her through a hoop. I mean, the hoop means it’s on purpose and she’s in on it. 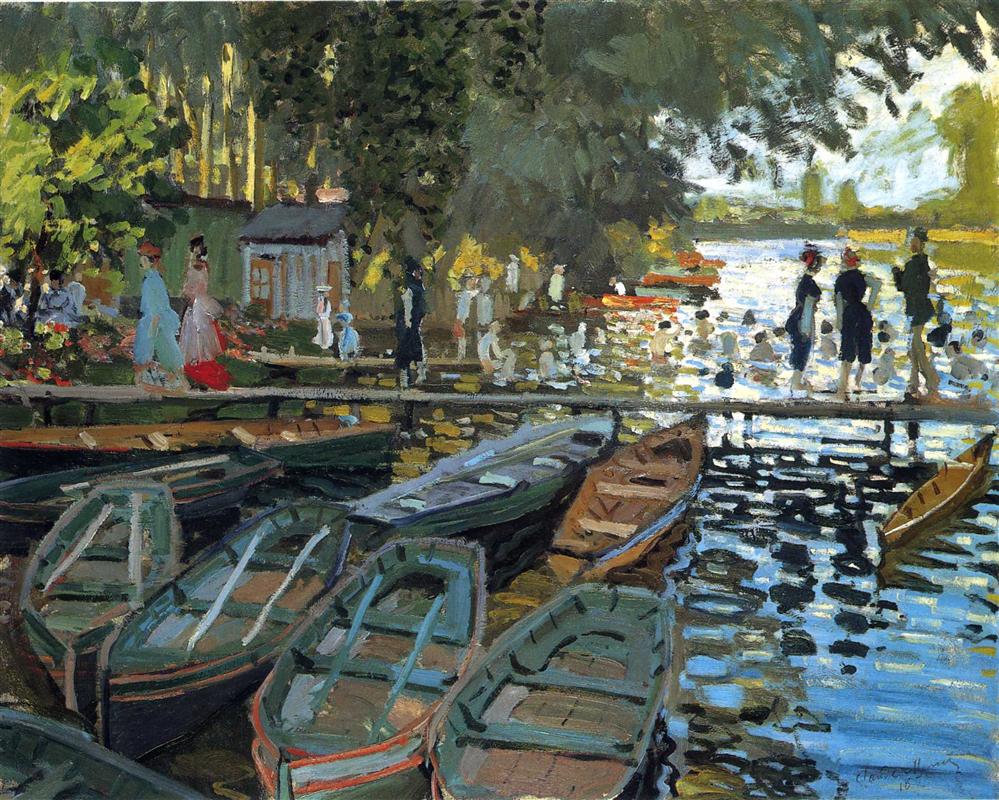 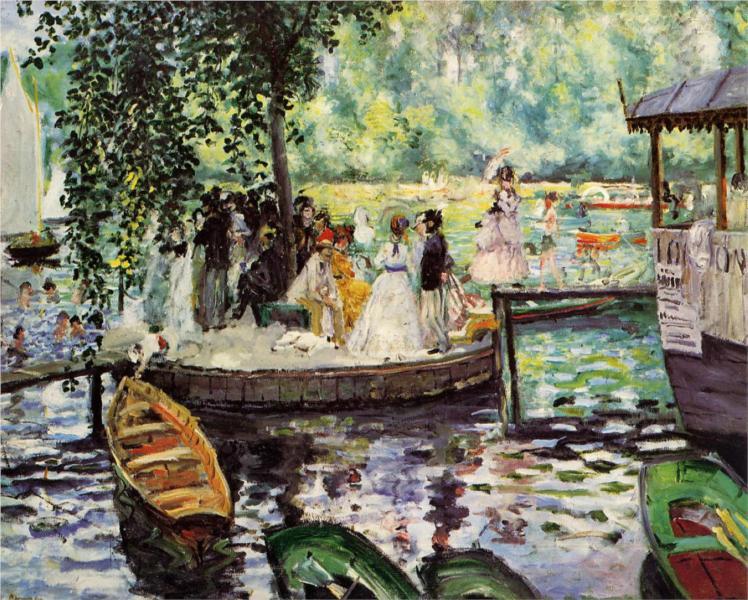 “From the train station she led him to the banks of the Seine; out on the river he could see people gathered on a small island, connected to the shore by a long wooden dock. Rowers and day sailors had tied their boats to the dock. There was music playing and people on the platform were laughing, dancing, and drinking, the men in bright, striped jackets and straw boaters, the women in brightly colored pastel dresses. All along the shore bathers waded, splashed, and swam, and farther up the river, Lucien could see couples lying together under the willows”

Of course, the two painters Lucien sees are Claude Monet and Pierre August Renoir, painting side by side. The Grenouillere was where the working and merchant class spent their Sundays, boating, swimming, dancing, etc. Leisure was a new discovery, brought on by the industrial revolution but the Parisians were taking advantage of it. Shop girls would take the train out the the Grenouillere in hope of meeting a gentleman, perhaps a boater, and single girls out for fun became known as les petite grenouilles, or “the little frogs.”

But this is the most famous painting done in Chatou, painted a few years later on the veranda of Maison Fournaise Restaurant, after the Grenouillere burned down. Luncheon of the Boating Party- 1881, Pierre August Renoir. 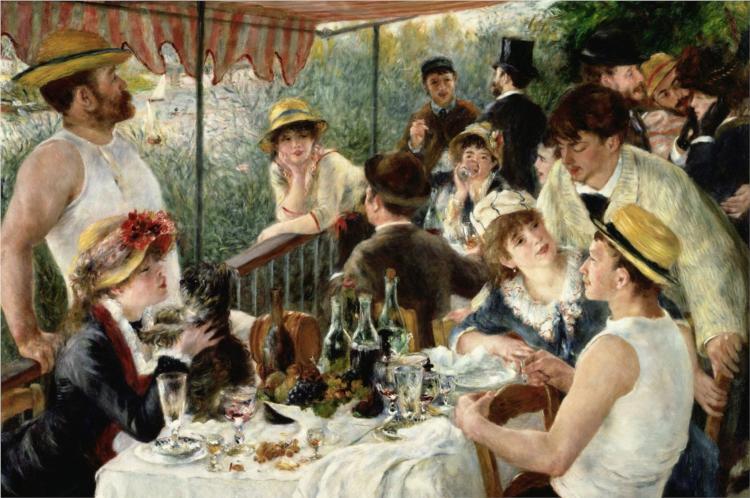 Woman with the little dog, is Aline Charigot, who will become Mrs. Renoir. The gent in the straw boater hat is Gustave Callibotte, an accomplished painter who exhibited with the Impressionists and basically, because he had money from his banking family, kept them alive by buying their work when nobody else would. When he died, in his early forties, he left his collection to the Louvre, who refused many of them, so they went on the open market. Gallibotte is one of the reasons that American Museums have such rich collections of Impressionist paintings. This one is in the Phillips Collection in Washington.