The Colorman had rented them an apartment in the Latin Quarter 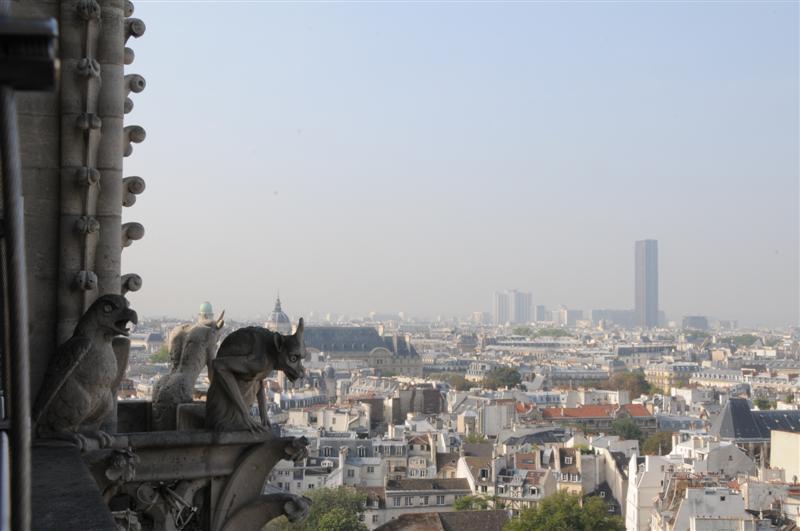 View looking over the Latin Quarter from Notre Dame. The Latin Quarter is so called because all the students from the University were required to speak Latin. It has nothing to do with ethnicity or nationality (As I thought. I really expected it to be the Spanish neighborhood until I learned this.)

–she’d been out strolling through the Jardin du Luxembourg, looking for a new painter– 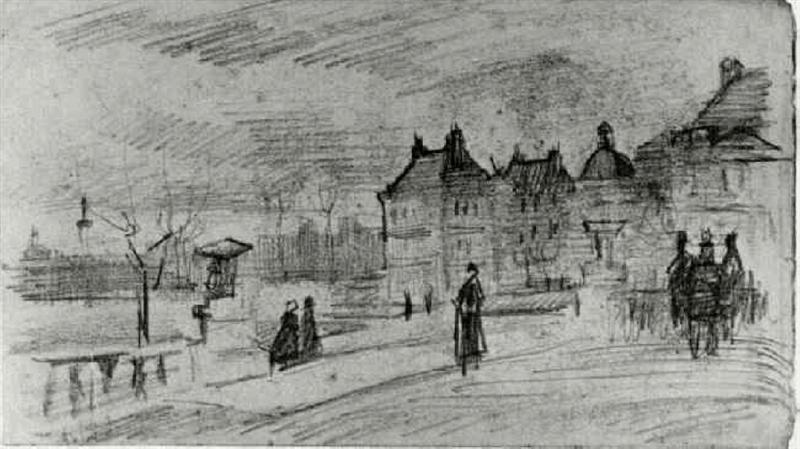 On the right is the Luxembourg Palace where the French Parliament meets. 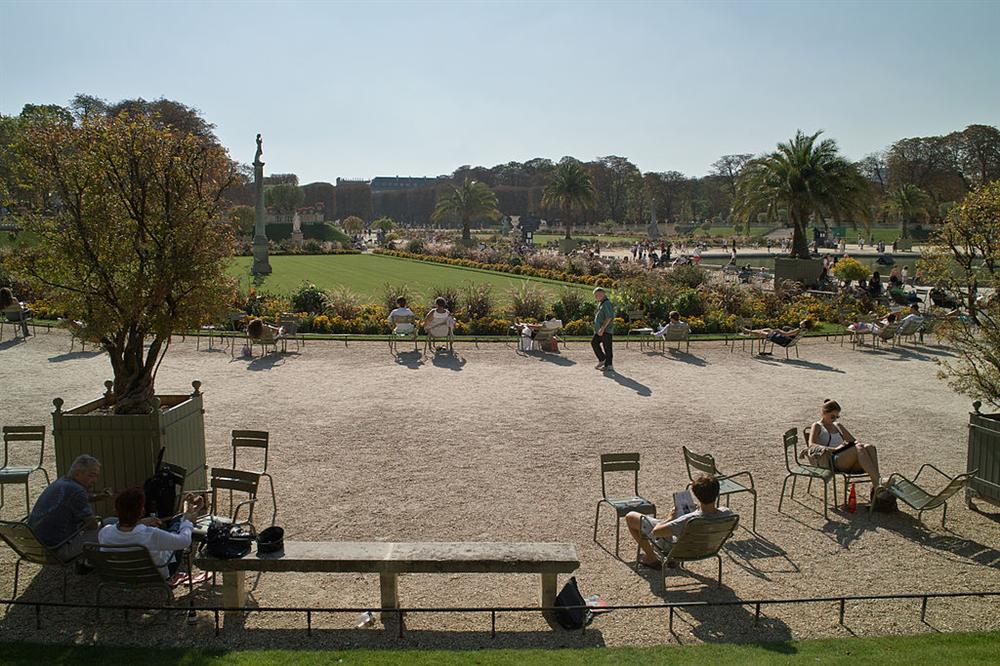 The Jardin du Luxembourg today. This park is adjacent the palace where the French Parliament holds session, so it’s akin to the Mall in Washington. On any given summer or autumn day, the park will be full of people sitting under the chestnut trees reading. Just reading. It’s a completely legitimate thing to do — go to the park and read.

Juliette let the tip of the cane drop, then sighed, whirled, and plopped down on the couch between the two pathetic penis plotters. 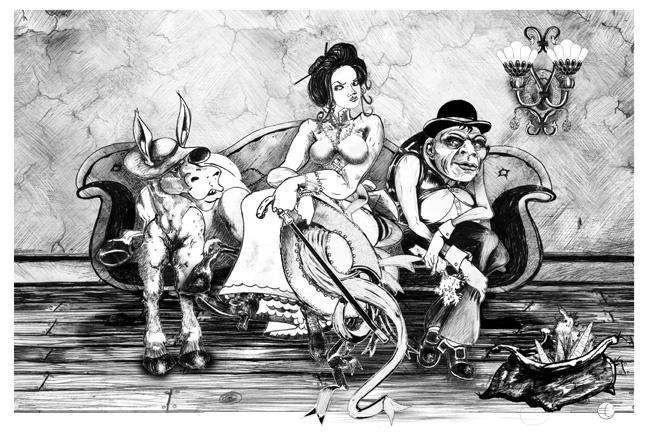 Julliette Between the Penis Plotters – Elias D’Elia
The rue des Trois Portes was, in fact, situated in the midst of three large churches. 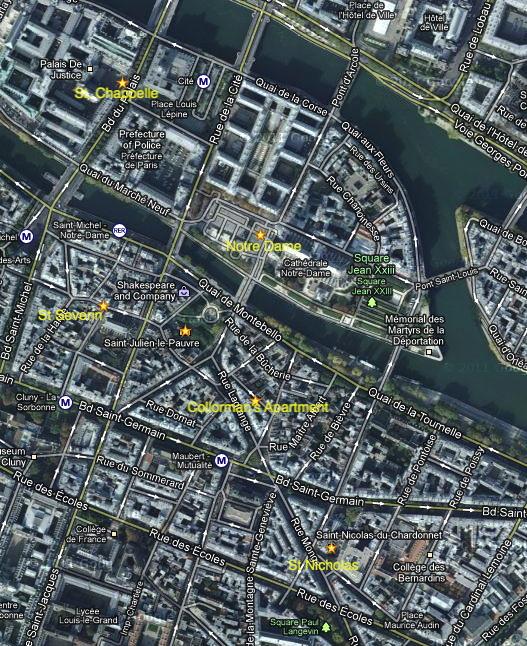 A map showing approximately where the Colorman’s apartment lay in relation to the churches. 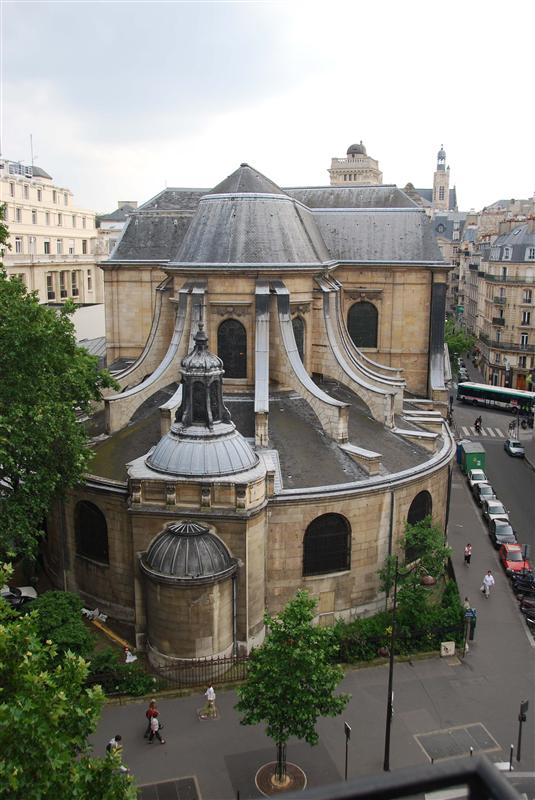 St. Nicholas au Chardonnay (Patron Saint of Box Wine)
to the west was the Church of Saint-Séverin 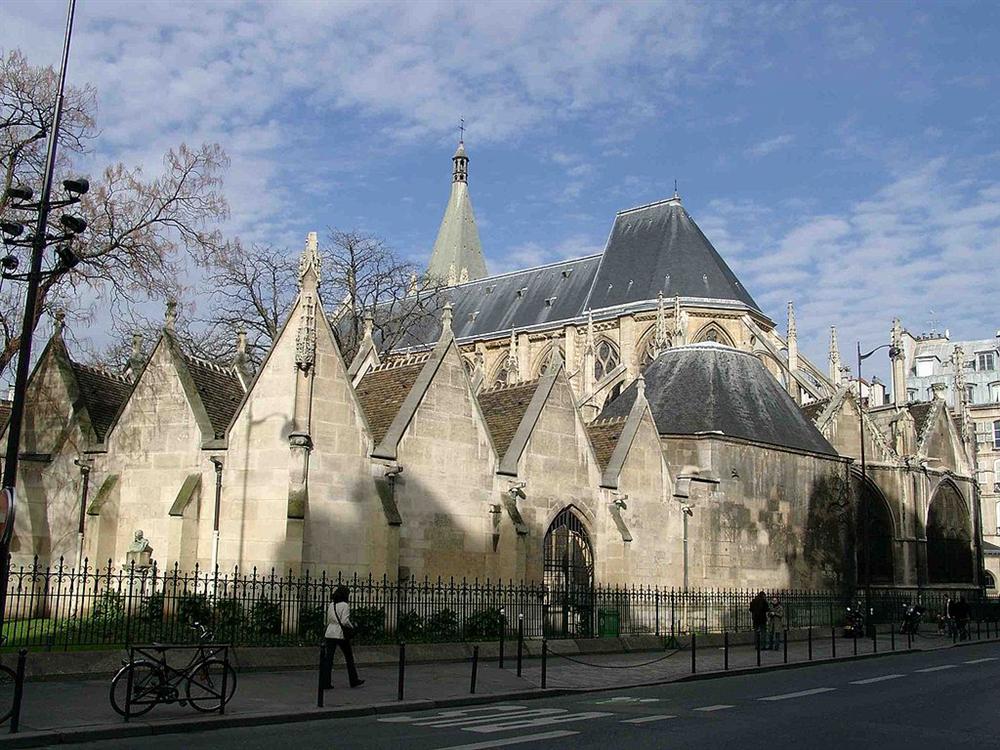 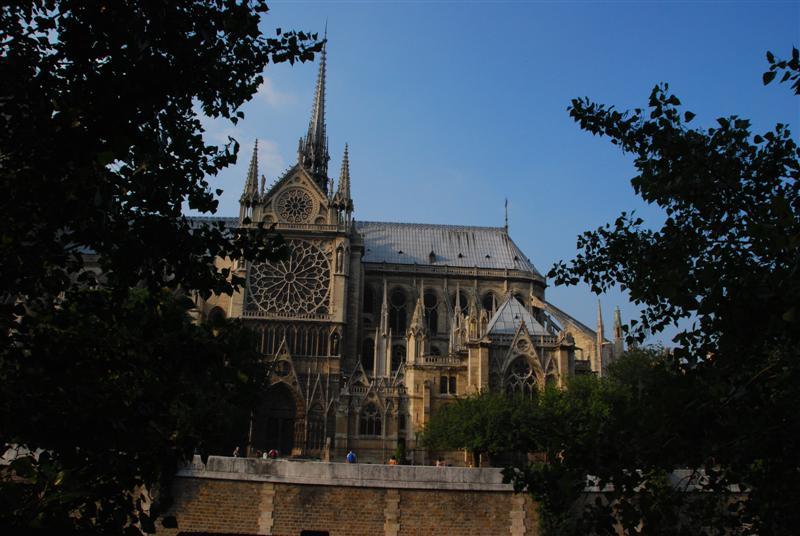 Side view of Notre Dame. The brick wall is the bank of the Seine.
And that wasn’t even counting Saint Chapelle, another two blocks from Notre Dame 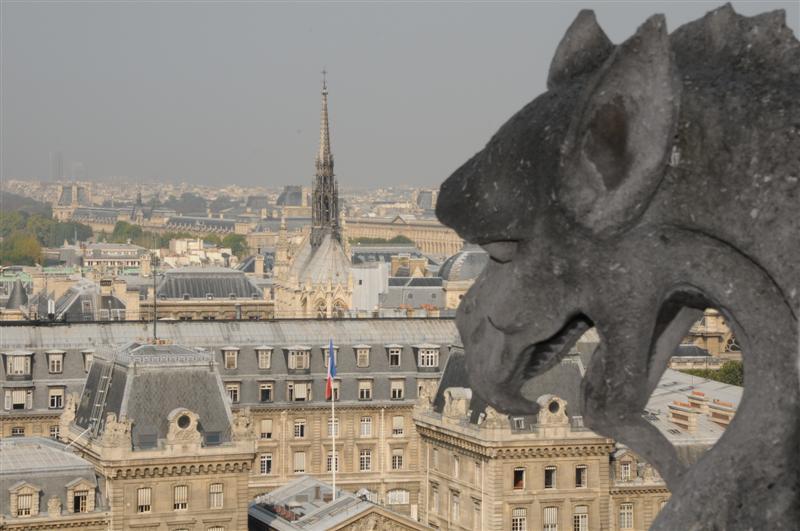 St. Chapelle as seen from Notre Dame (Hunchback view). Steeple just in front of the gargoyle.

“It’s nice,” said the Colorman. “It has two bedrooms and a bath. You should take a bath. Etienne hasn’t seen this one naked. He’ll like her.” 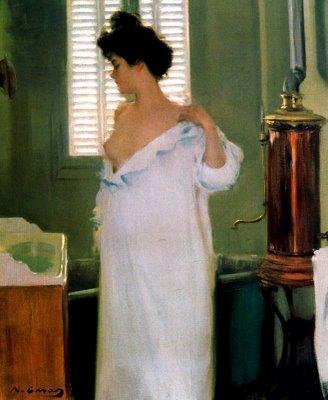 Ramon Casas – Albans del Bany – 1894
This was the painting Eli used for inspiration to draw the Colorman watching Bleu getting ready for her bath in Chapter 7. I’d never seen this type of water-heater depicted before, but here it is, a full-size tub and water heater in a bedroom, so this is where he started.
Chartres, France, 1174 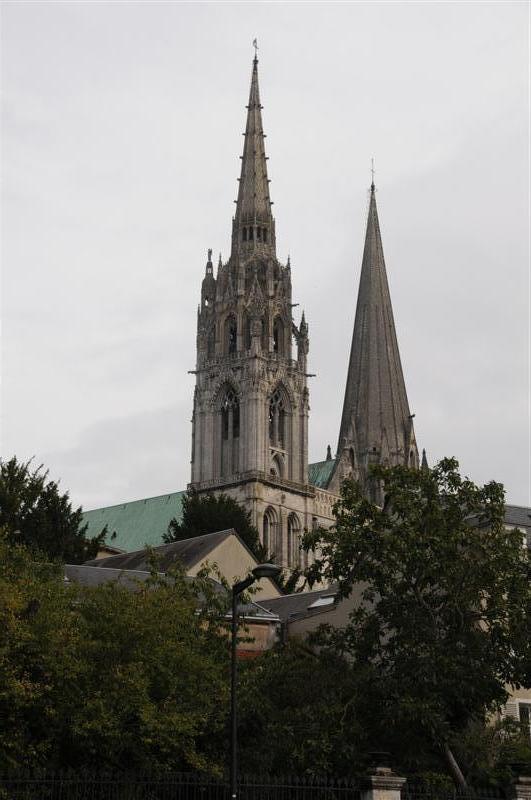 The Cathedral at Chartres – built in 1174
It’s actually called Notre Dame de Chartres – Or, Our Lady of Chartres, as Notre Dame de Paris is Our Lady of Paris. Someone wrote to me once, “I wonder how the Church feels about having a million visitors a year inside their Lady.” 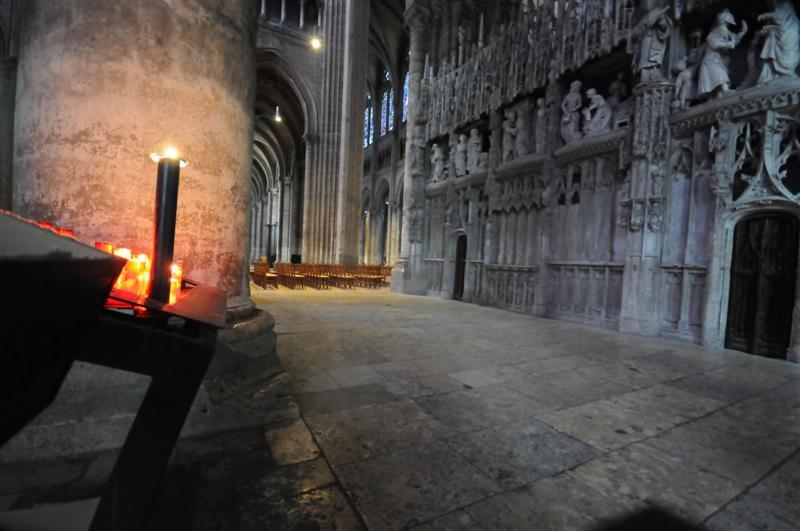 Interior of the Cathedral at Chartres
But it’s the windows at Chartres that got it into the book. All that glorious Sacré Bleu. 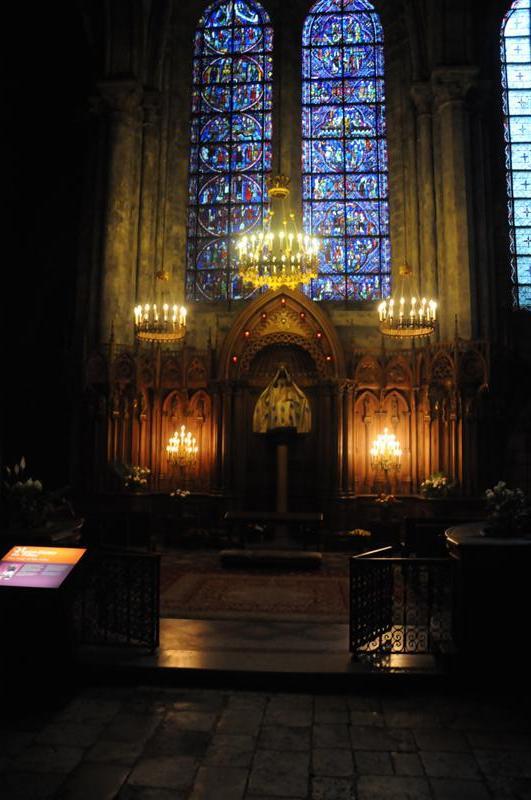 Interior of Notré Dame de Chartres
Victoria Findlay begins her excellent non-fiction book, Color with a description of how her father took her to Chartres when she was a little girl and how he told her that the recipe for making the blue of Chartre’s windows had been lost to history, and how that had started her fascination with the sources and history of color. It’s a brilliant scene, and it compelled me to go to Chartres and to write this whole chapter into the book to talk about the traveling glassmakers of the middle ages. As it turns out, the furnaces were probably not out in the open, as I describe, but they would have been separate from the building site. 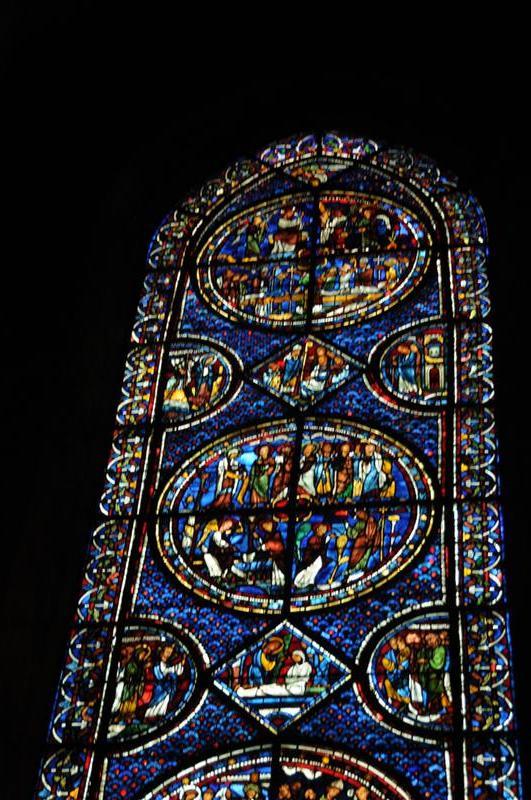 More of the Sacré Bleu at Chartres.
Just before dawn the Colorman and Etienne stood by the tracks at Gare de Lyon waiting for a train that had departed a day ago from Torino 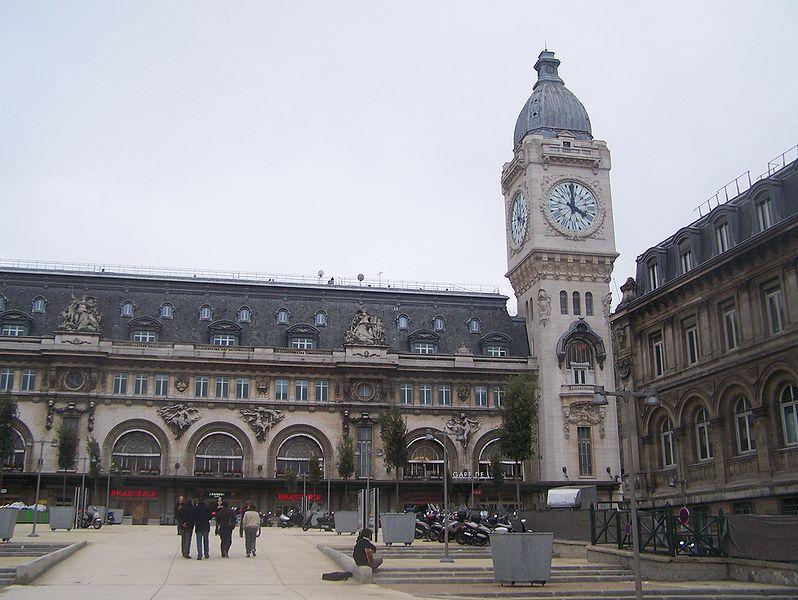 “Yes. Georges Seurat is the name. My card.” 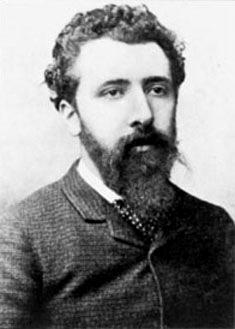 “There was a very small monkey in a very large park. Sunday Afternoon on the Island of La Grande Jatte. That painting was about placement of color.” 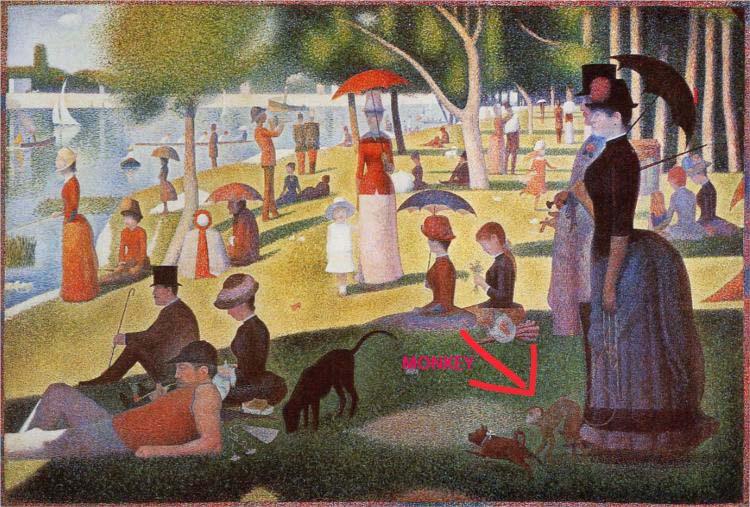 Sunday Afternoon on the Island of La Grande Jatte – Geoges Seurat –
It IS a very large painting. 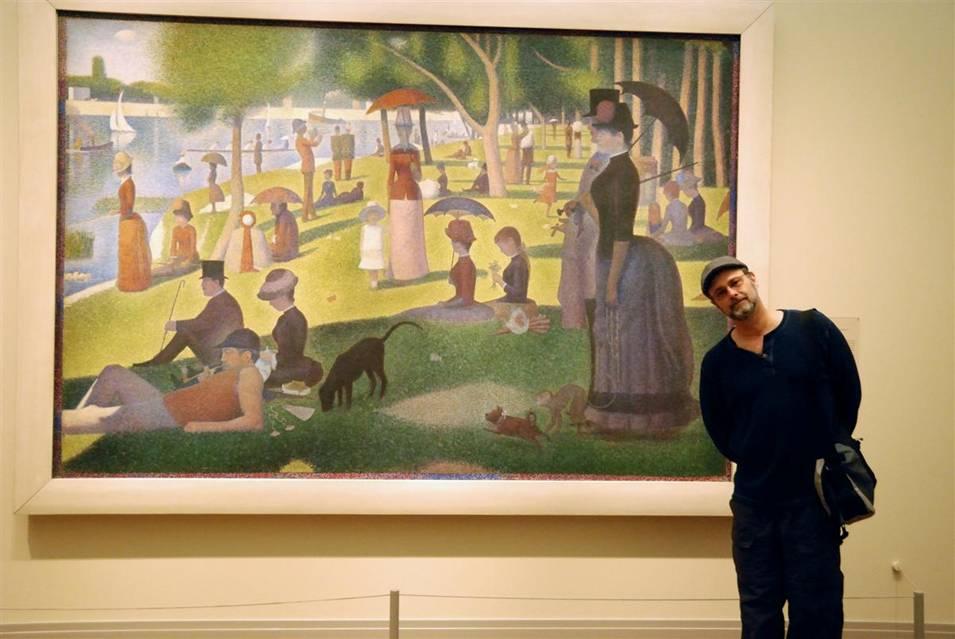 Here’s your author guy with La Grande Jatte at the Chicago Art Institute, where it will always be. The Art Institute loaned the picture to the NY Met and the painting was barely rescued from a fire there, so after that Chicago decided that La Grade Jatte was never going to leave the Art Institute again.