Émile Bastard lived in a small house his father had left him in the Maquis, just below the Moulin de la Galette, above the cemetery, on the northwestern slope of Montmartre. 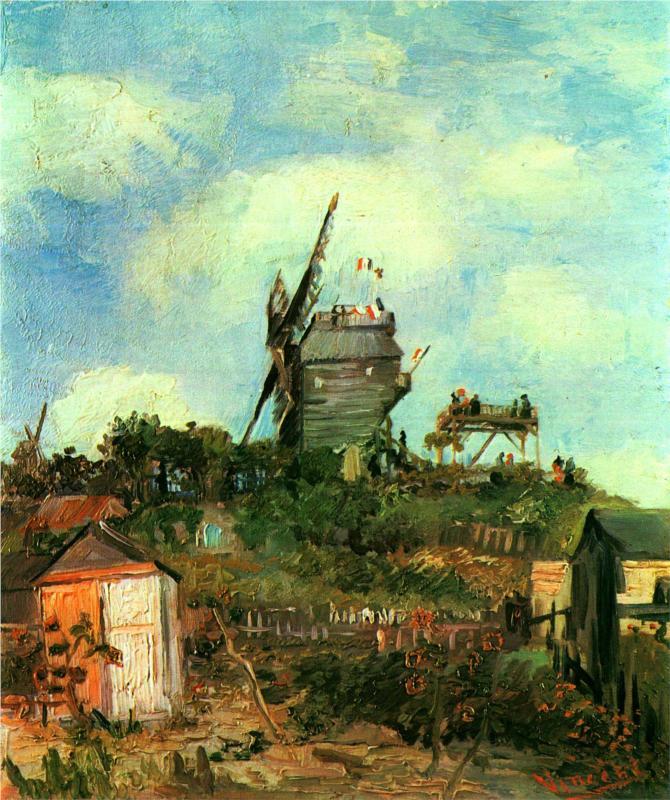 Moulin de Gallette – 1886 – Vincent Van Gogh. This shows both the dance/hall windmill and part of the Maquis, the neighborhood where Le Professor lives. 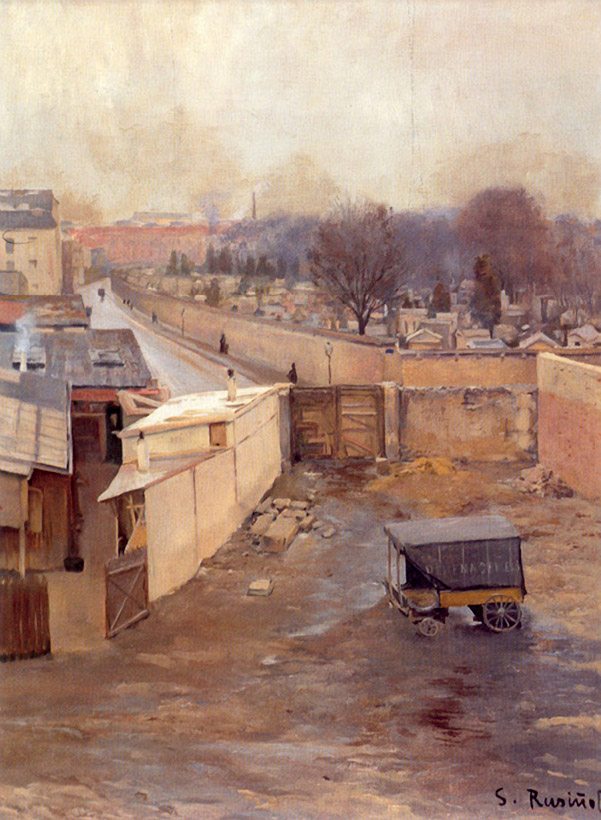 Rusignol, Salas, Pelez, and another unknown Spainyard named Picasso all came to Monmartre in the latter part of the 19th Century, although they don’t really become part of the art culture until after Sacre Bleu takes place.

“Please, Monsieur Professeur, I have done some experiments with absinthe, and I can attest that it has dangerous hallucinogenic powers 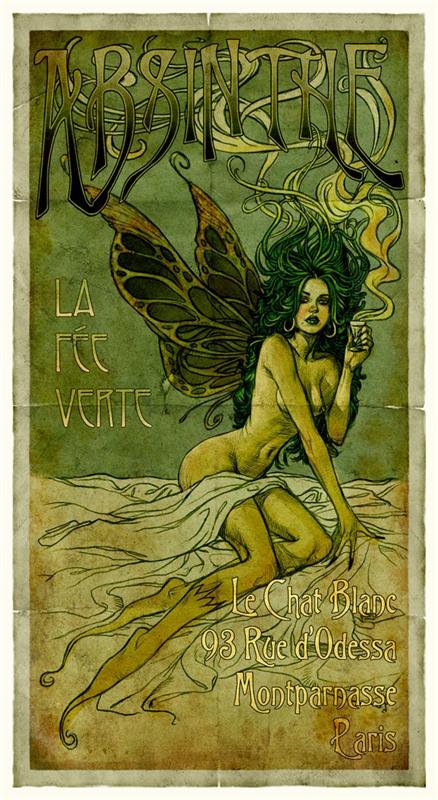 This was obviously the inspiration for the final cover of Sacré Bleu. When I first found this image, I thought it was a vintage piece, done in the 1890s, and I couldn’t find the artist. After the book was finished, and we were already trying to put a cover together, I found not only was it not vintage, but that Aly Fell was alive and working in the U.K. and I commissioned him to turn the Absinthe Fairy into the cover below. 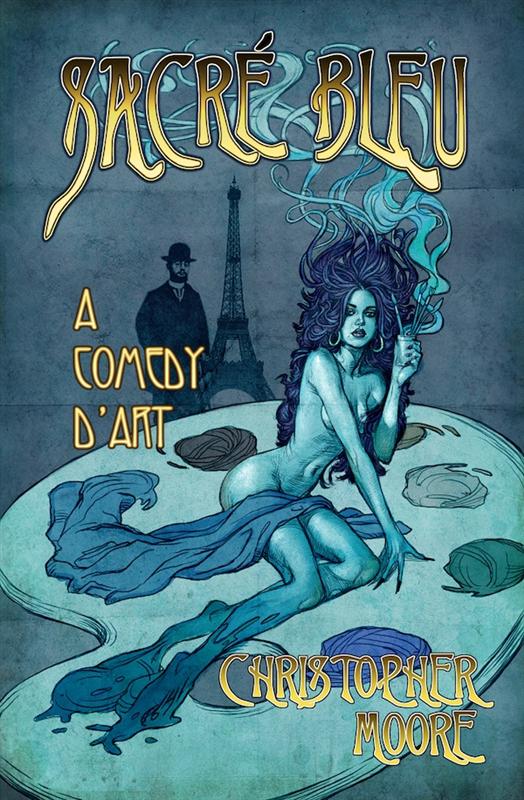 “I have a plan,” said Henri. “I know two doormen from the Moulin Rouge, stout fellows who know their way around a billy club. If you find something, we’ll burst into the studio, knock Lucien out, drag him off of her, and tie him up in my studio until he comes to his senses.” 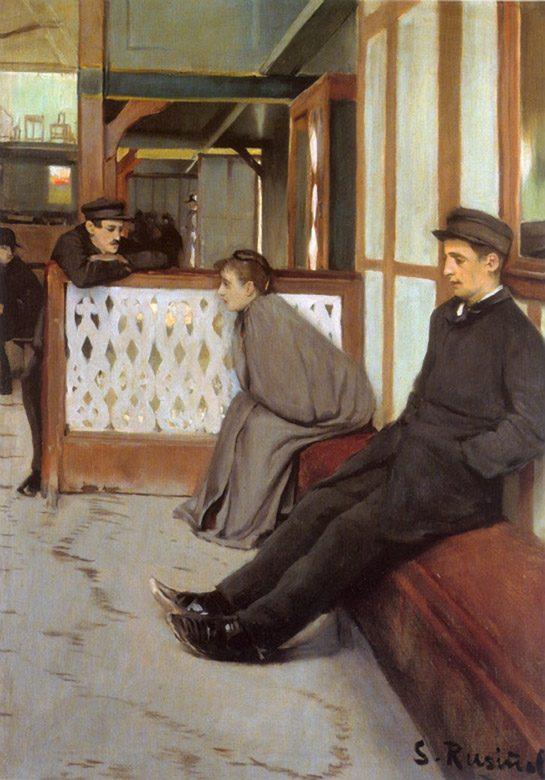 Degas, acting as if he didn’t see Henri standing nearby, said, “These redheads of Toulouse-Lautrec’s, they all look like syphilitic whores.”

“You say that like it’s a bad thing,” Henri said over his shoulder 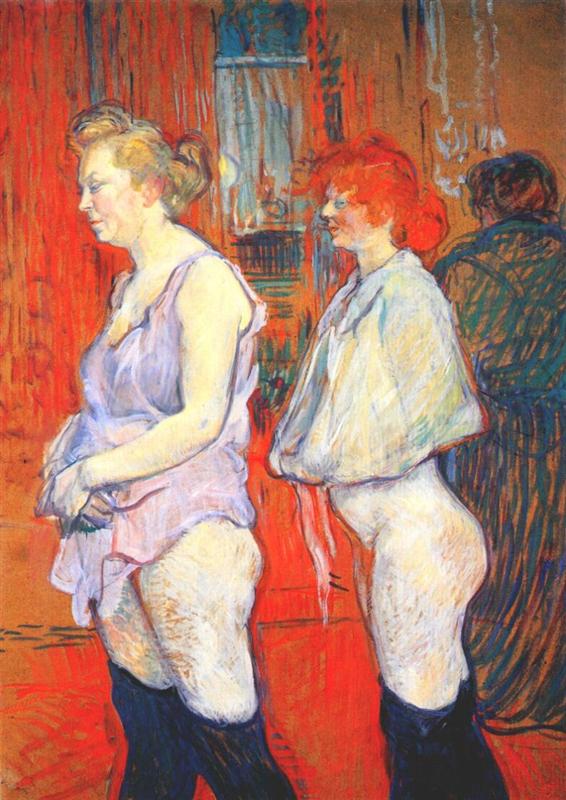 Whores at Henri’s favorite brothel getting checked by the visiting doctor. So, really, they could be “siphilitic whores”.

Henri was preparing to shrug off his friends and go get outrageously, scandalously drunk in some working-class dance hall when he felt a hand on his shoulder and looked up to see a thin, white-goateed man in his fifties looking at him from under the brim of a rough linen hat: Pierre-Auguste Renoir. 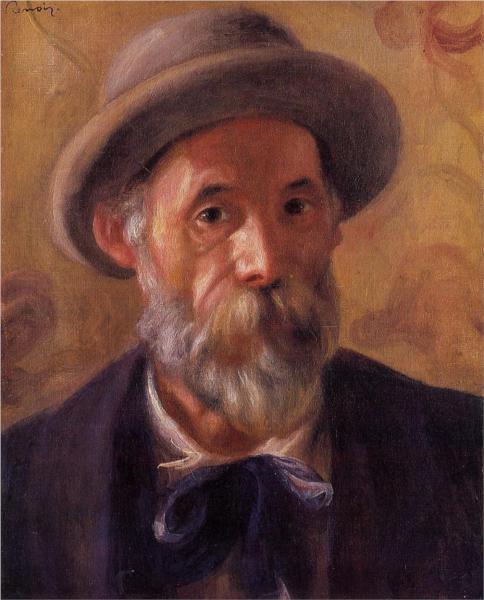 His dancers are things to him. Objects. He has no love for them. 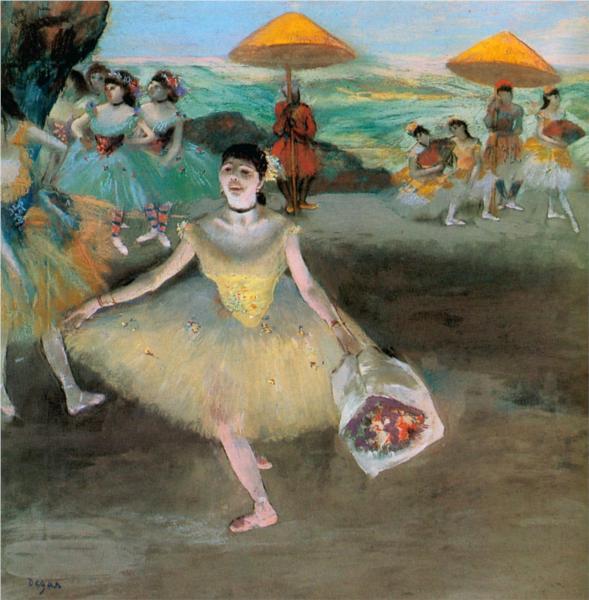 Your dancers, monsieur, they live. They live on canvas because you love them, no?” 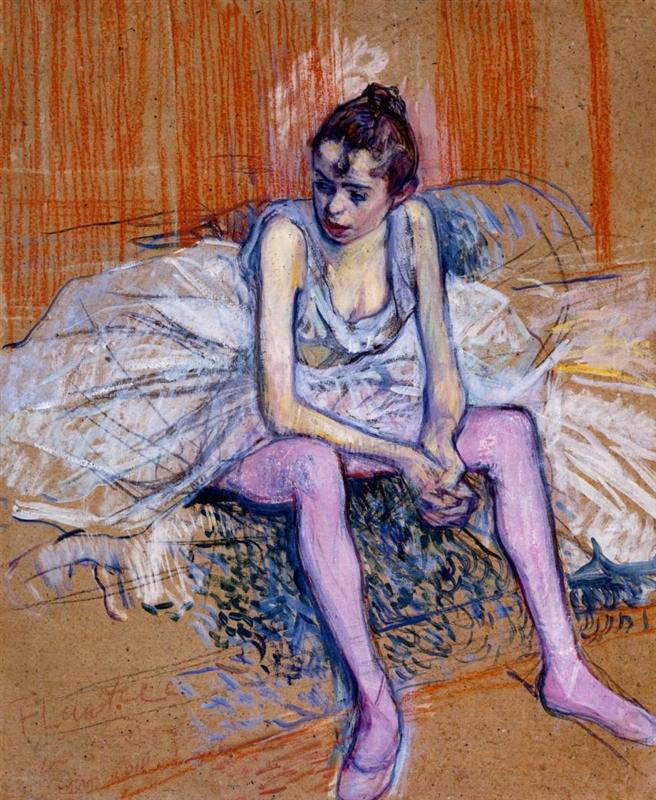 What pettiness! Pissarro! Master of us all. But what they don’t know, that I know, is that from his hotel room window, he is doing the best painting of his life. 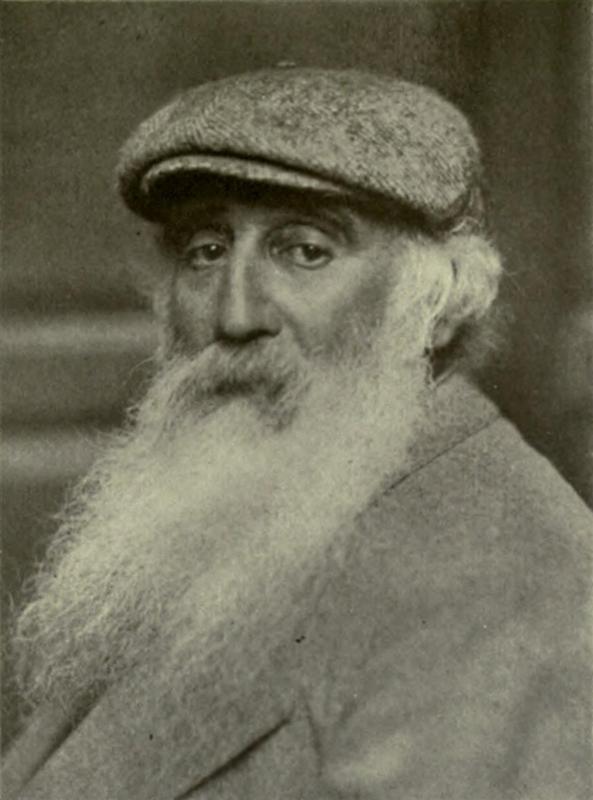 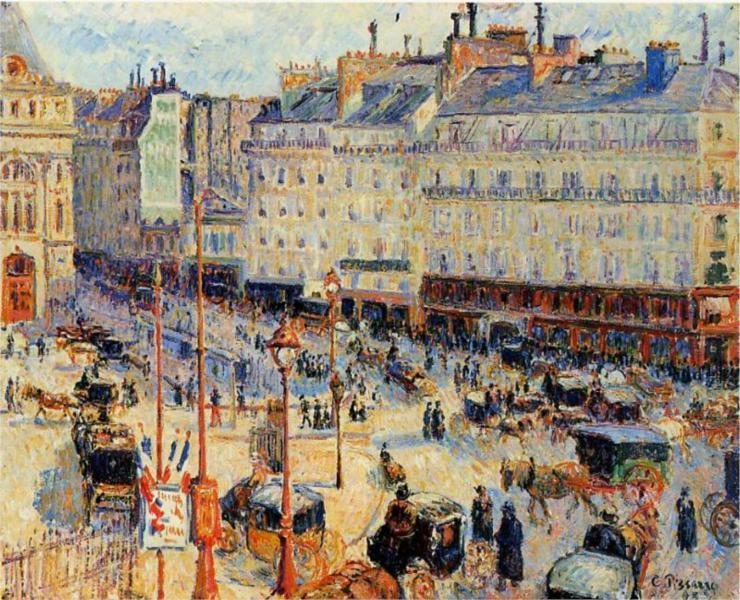 One of the many “aerial” view paintings by Camille Pissarro, and probably the paintings for which is is best known. Painted from hotel rooms.

The proprietor of the laundry was a scruffy, haggard man who looked as if he might have been hanged and revived at some point. 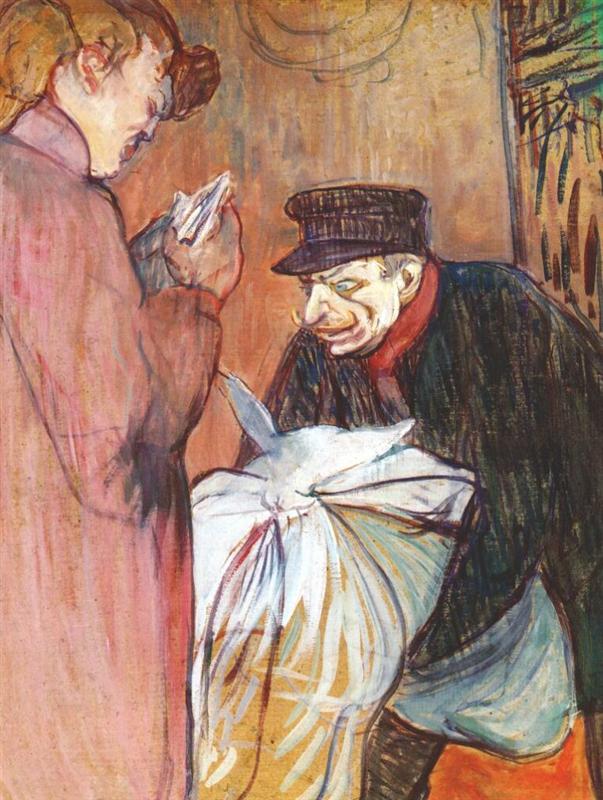 While, the character in the story doesn’t work in a brothel exclusively, I based the description of his character on this painting.

“I am Carmen Gaudin,” she said. 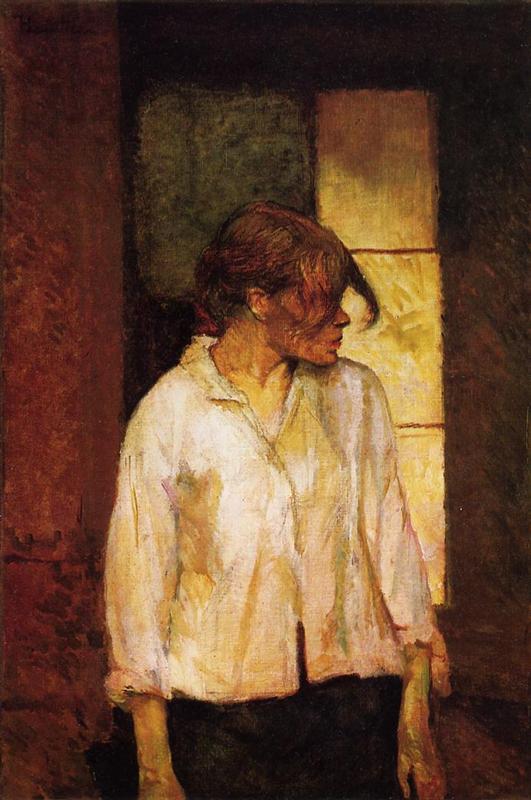